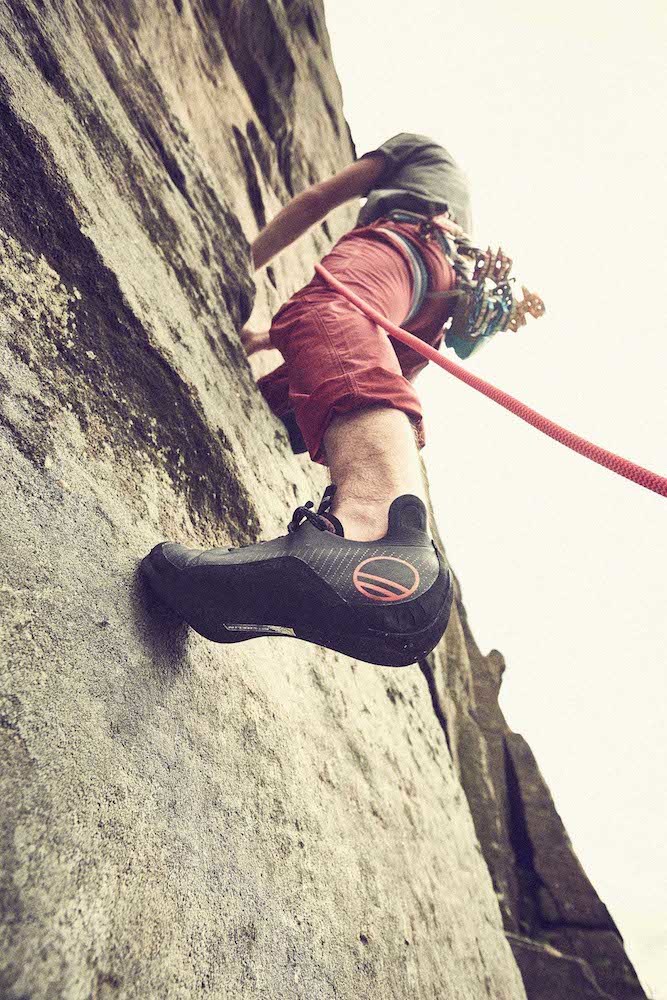 A teamwork between the Team of the Footwear Division in Montebelluna and the Michelin-born expert, led to the creation of the first WILD COUNTRY climbing shoes: Parthian and Meshuga.

The French company has provided its partners with the knowledge and technique of Michelin designers, adapting their latest generation technologies to outdoor sports products, thus providing soles that can best respond to the most critical situations.

On the occasion of the OUT DOOR Friedrichshafen exhibition, which took place from 18 to 21 June, MICHELIN presented three new partners: BOREAL, VIKING and WILD COUNTRY. By extending the circle of collaborators together with GARMOUNT, MAMMUT and MILLET, Michelin adds the segments of the approach and climbing to its own field of action.

The goal of the two partner companies is to create climbing shoes that can work synergistically with the upper and lower sole, respecting the foot biomechanics, thanks to innovative solutions that change the rules of climbing.
In response to the precision, durability and reliability of the Michelin engineers led by Emmanuel Igier’s experience and the team of designers led by Trond Sonnergren, they conducted an extraordinary study to identify the level of decay performance of the sole. The starting point was grip and friction.
The requirements needed to best respond to these issues have been developed by Michelin within the MotoGP context, with the Slick Racing tires technology, which stand out for control and adherence to the ground.

The Formula compound was born, which then led to the engineering of a specific blend designed exclusively for and with WILD COUNTRY: Formula Wild, which guarantees optimal adhesion, precision and resistance over time.
A solution that keeps performance at rising and falling temperatures: an unmatched efficiency from 0 to 25 degrees, preventing the sole from softening up to temperatures, and vice versa, to harden when it drops to zero degrees.

Another strong innovation that contributes to improving the precision of the shoe concerns the production process of the sole: leaving the plate system, for a molded sole and molded directly to the bottom of the shoe. A choice that allows you to get a 3D sole. It is therefore possible to define the exact thickness and orientation of the rubber in the different areas of the foot, in order to offer maximum sensitivity and better friction, the integrated arch support instead guarantees stability and torsion resistance. This option also allows to reduce the scraps and, in the event of wear, to reshape the shoe with the same precision in the forefoot area, always through the printed sole.

Thus, a revolutionary sole for compound, design and production process is created, coupled with innovative ugg boots construction technology, allowing the shoe to maintain their shape and performance for longer, without deforming and widening. A result made possible by the patented “sandwich” construction WILD COUNTRY, which is characterized by an elastic layer of polyurethane laminated inside two layers of microfiber. Additionally, no extra seam or rubber is required, so there are fewer pressure points.

Stefano Madau General Manager Wild Country
“The idea of ​​a shoe line for climbing comes from the belief that it’s not a normal shoe, but a real sports climber. We realized that the times were ripe to address with determination and with adequate resources an ambitious project. Internally, we were ready to develop a new technology in the construction of the upper, while MICHELIN’s collaboration gave us the necessary boost to test: we were sure to work with who has the know-how on the compound and has a new approach with the Want to experiment“.

The strengths that distinguish Wild Country shoe with Michelin technology:

For more information about Michelin-Lifestyle

Those who are interested in Wild Country products and philosophy can visit the official site.