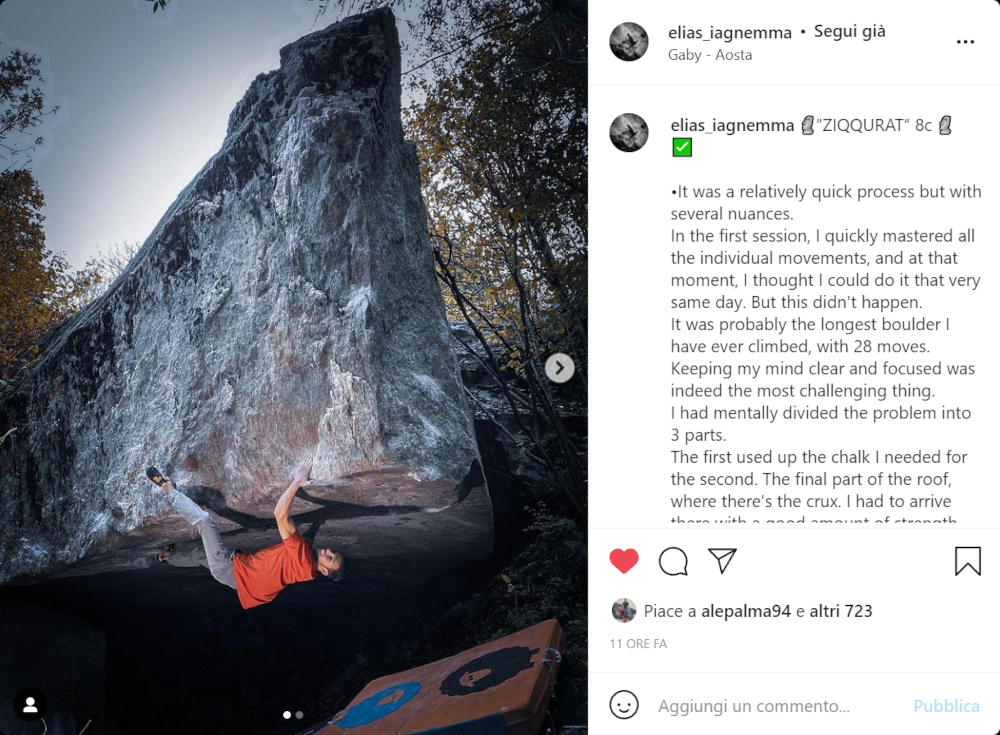 In these days definitely propitious for great achievements, we are also pleased to witness the ascents of our best boulderers. In particular, Elias Iagnemma and Stefan Scarperi, who in the last few days have further demonstrated the high strength that we already knew well.

Elias has in fact climbed one of the hardest lines in Italy, a pearl by Niky Ceria located in Gaby, in Valle d’Aosta Valley. The boulder in question is Ziqqurat, an 8C that Ceria sent in 2015 and which then had a single repeat by Gabriele Moroni in 2017.

An edge on a roof that climbs from left to right on this majestic boulder, for over 20 movements, which in addition to an extraordinary strength also require great body control. Iagnemma repeated Ziqqurat the day before yesterday, and announced it on his Instagram profile.

On the other hand, there are two notable climbs by Stefan Scarperi, who is currently on a pilgrimage to Fontainebleau. Already during the weekend he had started his stay in a great way, repeating Gecko Assis, 8B+, while yesterday, again from his Instagram profile, he gave news of an even more remarkable repeat. In fact, Stefan repeated in a single session Satan I Helvete Bas, a version for which Oriane Bertone proposed the 8C. Already some of the subsequent climbers suggested a downward revaluation and also Stefan confirms that this line is better assessed as 8B+. Numerical elecubrations that do not detract from the exceptional repetition of Scarperi, whose video is shown on his Instagram profile.

In addition to them, a further repetition of Dreamtime in Cresciano should be noted, by the Dutch Michiel Nieuwenhuijsen: another 8C that follows at a very short distance that of Der Mit Dem Fels Tanzt, sent a few days ago in Chironico.

A truly unprecedented autumn-winter season on boulders all over the world is expected!