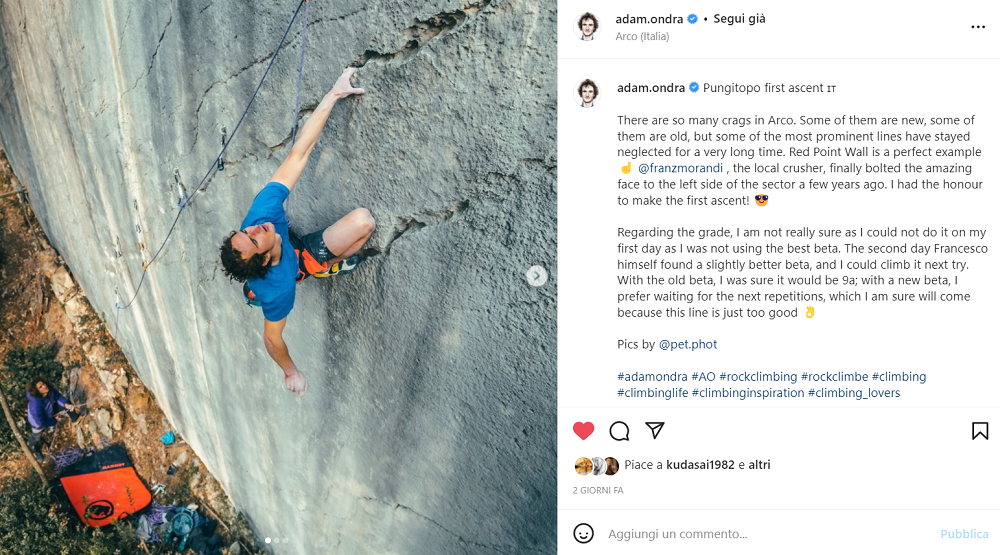 Still good news from the Arco territories: Adam Ondra has freed a new route, with a probable 9a grade. While Stefano Ghisolfi is focusing on extreme projects such as Excalibur, Adam prefers to alternate and devotes himself to other “easier” pitches in the meantime. In the famous Red Point Wall in Laghel he has conquered a new FA that looks really tasty from the photos, calling it Pungitopo. The rock looks super and the line is no less. Ondra tried the route with the local Franz Morandi, borrowing the method from him and managing to solve the shot in a short time. Regarding the grade, the pitch could be around 9a but new ascents are expected for confirmation.

On a long Spanish vacation, Domen Skofic proves that he did not win the lead World Cup in 2016 by sheer luck. Interspersing the main projects with easier climbs, Domen made two interesting pitches: Gypsy blood and JoeDan. The first is a solid 8c+, a grade which also confirms Skofic. The second, on the other hand, is a very hard 8c+, for which Domen proposes a full 9a. Furthermore, the Slovenian phenomenon has decided to climb the pitch without using the kneepad, a tool that is increasingly heard in high-level climbing news. Undoubtedly, if we continue in this direction, we will soon see heated discussions on the use of the kneepan, a topic that has remained quite muted until now.