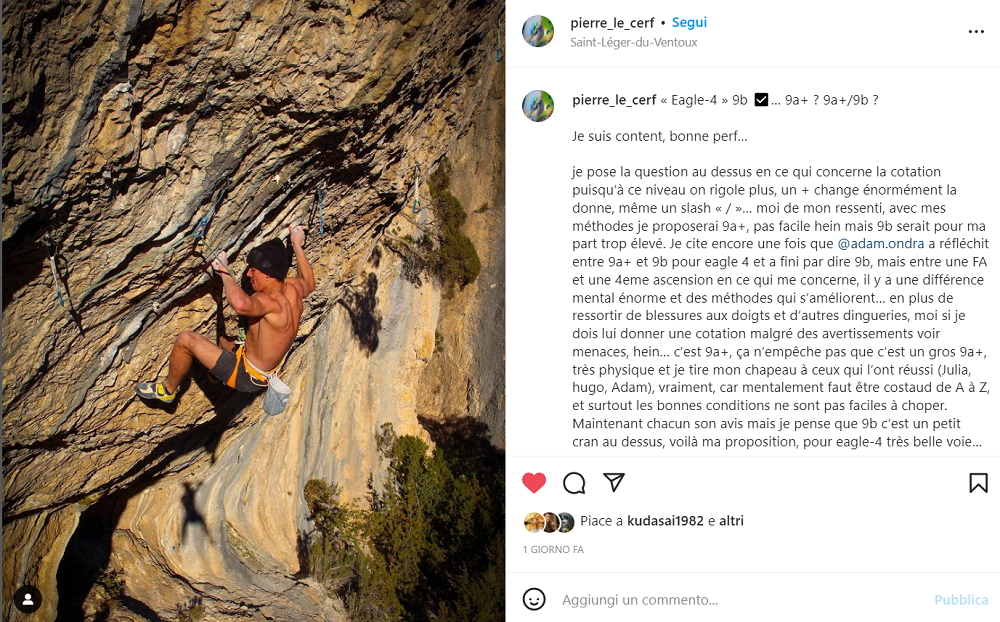 One of the most promising talents on the French scene is certainly Pierre Le Cerf, who to be honest is no longer so much a promise but more a certainty. The young man has strung together a series of extreme routes and boulders that are truly envious and he doesn’t spare himself in the comps.

The last extreme test he faced is Eagle 4, the very famous pitch of Saint Léger du Ventoux that reaches the mind-boggling 9b. For the Frenchman, this is the first 9b in his career, if only… he downgraded it. In his opinion the pitch is worth 9a+, albeit hard, but 9a+.

The extra implications of this performance are many. First of all, they demonstrate a great ethics and a strong personality of Le Cerf, which doesn’t give a damn about the box office and points to intellectual and vertical honesty, something really not taken for granted and to be admired. The other great consequence affects the exploits of Julia Chanourdie. The French champion would come out of the handful of women capable of climbing a 9b, even if her ascent remains truly of the highest level. As when Ondra downgraded Erebor from 9b / + to 9b, “penalizing” Laura Rogora’s record, Pierre also specifies that it is not at all a question of controversy or anything else, he simply feels he has to level the difficulty attributed to the route on a other degree. Once again the harsh sentence will go to the after-effects.