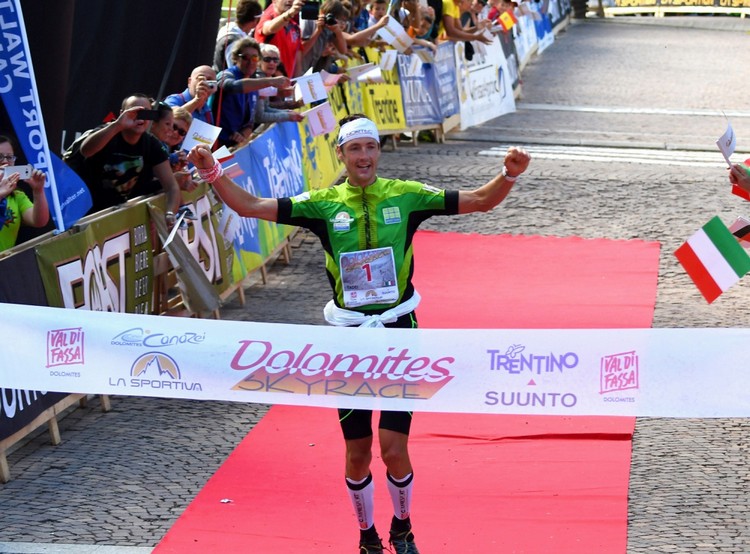 Posted at 00:00h in News Trail/Snow by ricky

Does not change the master Dolomites SkyRace. Friulian thirty-five Tadei Pivk wins again constructed
in 2015 and leads to two share the number of successes in the prestigious race Fassa, this year
inevitable stage of Skyrunner circuit © World Series. The driver of the Crazy Idea Team took
two hours, three minutes and 39 seconds to cover the 22 kilometers of the route, 10 uphill and 12
downhill, with a difference in height of 1,750 meters uphill, making a difference in the descending
part, where his technique, his physique, his ability to carve through unthinkable for other competitors,
has allowed him to accumulating two minutes of advantage over direct rivals administered to the finish
in Piazza Marconi.
Heron Pivk failed the company to lower the record set in 2013 by Kilian Burgada, 2h00’11 “
but it has met its best time uphill from when taking part in this race. All the foreign
the rest of the podium and everything new from the past: the second place finished in the hands of middle-
distance runner Norway Bergen, born in 1997, Stian Overgaard Aarvik, broke off in the final by climbing
companion Martin Anthamatten, the Swiss Class 1984. The first was undoubtedly the real surprise of the
day, but Also the South Tyrolean Sarn Martin Stofner, the Fiemme del’90 Stefano Gardener and Val di Sole
David Magnini, another talent of 1997, can cheer for their fourth, sixth and ninth place finish.
Among women, Laura Orgue Vila Team Salomon celebrates two “doubles”: the theme of the successes
Dolomites SkyRace, since his victory today gives an encore with that of 2014, as well as the one referring to
the three days Fassa, that Laura had opened with the sharp in the Vertical Kilometer, demonstrating a
condition enviable shape. Behind her she finished the Bormina adoption Elisa Desco (Scott Running)
who handled a long position without problems, the third French Allinges, in Haute-Savoie, Celia
Chiron (Optisport). Again it has not registered the record, set last year by Megan